Like many things in life, press intros are a mixed bag. Upsides include direct access to Porsche engineers and a chance to drive new models before they hit U.S. shores. Downsides include equal hours on airplanes and the ground, jet lag, recommended routes, and unpredictability.

Sometimes, you get great intel from Porsche’s best and brightest plus enough drive time to glean valuable observations. Sometimes you don’t, as was the case at the 2010 Turbo launch in Portugal. Rain made the race track at Estoril so slippery that Porsche canceled that test. The wet and unfamiliar local roads were little better.

We’d been particularly curious to drive the second 997 Turbo after heavily criticizing the first one’s handling. The 2007–2009 Turbo exhibited a lot of squat under acceleration and far too much brake dive, which proved both unsettling and unpredictable.

Despite the rain in Portugal, we did see hints of greatness. While the 997-2 Turbo looked nearly identical to the 997-1 Turbo, it was no mere facelift. Its new, 3.8-liter 9A1 flat six was more powerful and sweeter than the old, GT1-based 3.6. Its AWD had been revised to improve handling predictability, as had the suspension. Perhaps most interesting, a new option called Porsche Torque Vectoring applied braking to the inside rear wheel to kill understeer (Excellence February 2010). On wet roads, at reasonable speeds, at least, PTV worked transparently. Still, we wanted to try it on roads we knew.

It took a while, but a 997-2 Turbo eventually made its way to our Northern California offices. Painted Macadamia Brown, it was optioned with PDK, Sport Chrono Plus, and PTV. We didn’t waste any time in heading for our north test loop, the most challenging 200-mile road loop we know. Sporadic rain made things interesting, leaving some parts of the road wet and the Turbo’s sides caked with filth. It wouldn’t get washed until its last day with us, however, because it never sat still long enough.

Every staffer came back with a wide grin and the same thoughts: “Incredibly fast.” “Super satisfying.” “Ridiculously fun, yet somehow mature.” 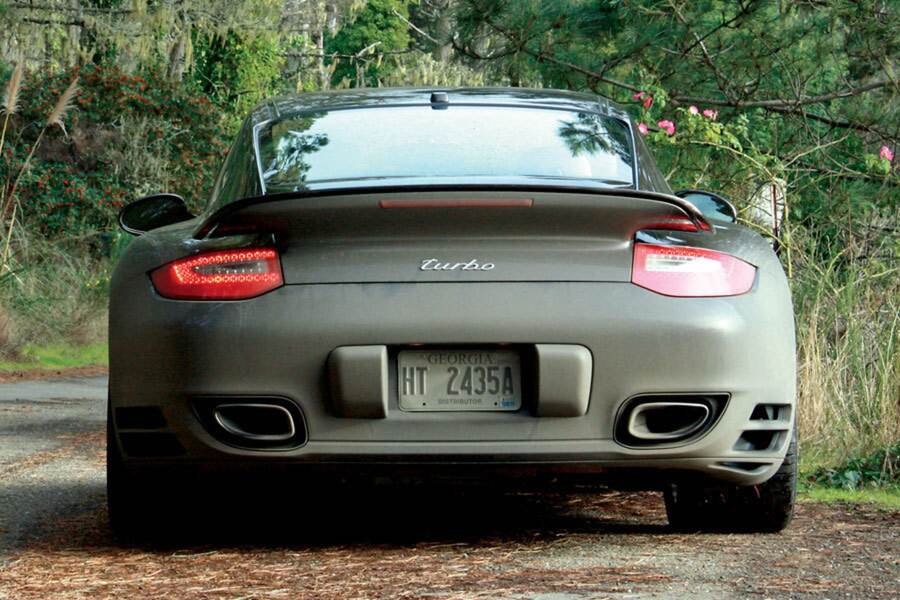 The Turbo’s variable PASM dampers performed beautifully, offering superb predictability and body control with plenty of compliance. You couldn’t feel PTV at work, but it helped the car turn in nicely, even in the tightest turns. The result: The sharpest factory Turbo we’ve tested, and a 911 that demonstrates there’s more than one kind of satisfaction when it comes to speed. It doesn’t offer the reward that comes after the work of hustling a GT3, that buzz that makes it hard to fall asleep hours later. The Turbo offers equal or superior speed, but it’s a lot more likely to put a smile on your face while you’re at it — yet it leaves you relaxed and refreshed upon your arrival.

PDK fits this car’s silken, sophisticated speed perfectly, and the Turbo’s sheer back road pace makes fingertip shifts indispensable. Despite my opinion that PDK steals too much driver involvement in other Porsches, I’d have to have it in the Turbo. It just fits this car — which is fast enough between corners to keep your mind plenty busy.

PDK also allows for a guilty pleasure: Launch Control. While I’ve never been a straightline guy, I must admit sub-three-second 0-60 runs (Porsche’s claims are conservative) are great fun to share with others, their eyes getting just as big as mine must have back in Portugal. Nothing can prepare you for the initial lunge, which sends a wave of discomfort down your torso. As a driver, it’s not all that fun — but seeing a 57-year-old pastor grin uncontrollably like an 8-year-old inside three seconds is a brand of fun made possible by no previous Porsche and few cars this side of a Bugatti Veyron. Porsche engineers say the driveline can take the hit repeatedly, which is why the warranty is unaffected by LC starts. Yes, it’s a party trick — but it’s a good one.

Perhaps most impressive is the Turbo’s two-sided personality. Around town, it’s civilized in any situation. On back roads, it’s engaging, entertaining, and energetic without being overwhelming. It’s sharp, but not so sharp as to be unapproachable. It’s keen, yet never annoying.

Much as we like this latest Turbo, it’s not quite perfect. There’s enough engine noise now, but only just. And, for 150 large, the interior doesn’t do it. But for its extra hides, the cabin can’t “out-special” a $25,000 GTI — and is utterly vanquished by Audi’s R8. Then there’s the exterior: Its soft, Lexus-leaning styling may hit a demographic, but it fails to create the desire 911 Turbos of old did. Where is the honest, brutal elegance of the 930 and 965, two Porsches that left no question about their drivers’ intentions?

If it’s the drive you’re after, though, this is the first 997 Turbo worth considering against the GT3 — especially if your plans don’t include a race track. Is the 911 Turbo back? Yes, and how.