This 1989 Porsche 911 Carrera 4 coupe is powered by a supercharged 3.6-liter flat-six that drives all four wheels through a five-speed manual transaxle. It is finished in Velvet Red Metallic over Linen/black partial leather and is equipped with 17″ Cup-style wheels, a sunroof, a CD stereo, cruise control, and air conditioning. The car spent time in Maryland and Virginia prior to the seller’s acquisition in 1999. Modifications under current ownership include installing a TPC Racing supercharger, a fiberglass fixed spoiler, teardrop mirrors, Recaro seats, RS-style door panels, Porsche Tequipment steering wheel, Eibach lowering springs, Bilstein shocks and struts, and Weltmeister Cambermeister strut tower brace. The underside engine cover and secondary muffler were also removed. The valve cover gaskets, spark plugs, battery, hood support struts, tires, sunroof seals, door lock module, center console, shift boot, and emergency brake handle cover were replaced in preparation for the sale, at which time the air-conditioning system was recharged and the oil changed. This supercharged 964 C4 coupe shows 137k miles and is now offered with a Porsche Certificate of Authenticity, manufacturer’s literature, a tool kit, service records, a clean Carfax report, and a clean Florida title in the seller’s name. 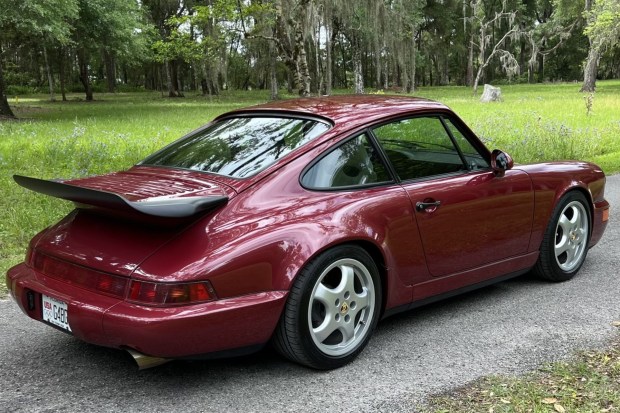 The Carrera 4 was the first 964 model released in the United States upon the platform’s introduction in 1989, and this example was reportedly refinished in its original shade of Velvet Red Metallic (U6) in 2004 after undergoing metalwork to repair dings and remove rust on the passenger side of the cowl next to the windshield. Features include an electric sunroof, integrated fog lights, teardrop-style mirrors, and a fiberglass fixed rear spoiler. The seller notes that paint protection film was applied to the car after the repaint on the front bumper, hood, mirrors, and ahead of the rear fenders. Blemishes in the paint and a chip in the driver’s side of the windshield can be viewed in the gallery are noted by the seller. 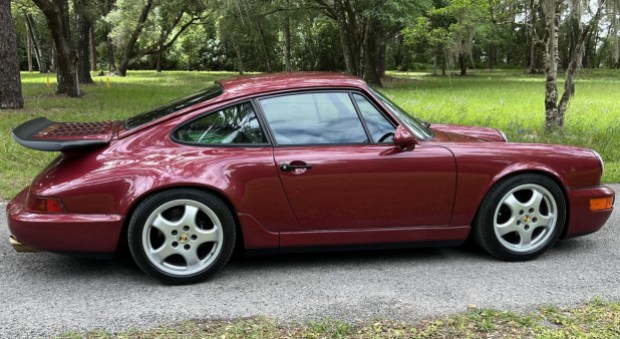 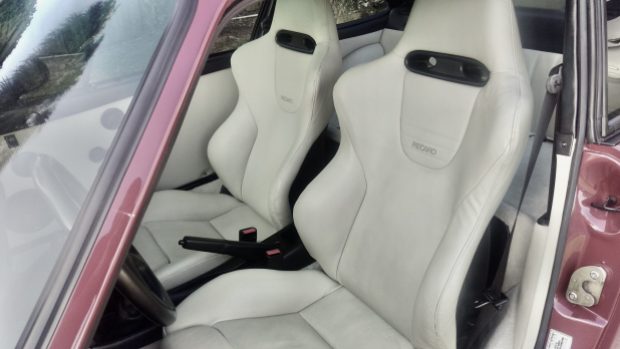 The cabin was modified in 2004 and features Linen leather over the Recaro Topline front seats and RS-style door panels. Amenities include a Pioneer CD stereo, black floor mats, power windows, cruise control, and air conditioning. A parcel shelf sourced from an RS America is installed in lieu of the rear seats, and the front trunk is trimmed in Carrera RS-style carpeting. The sunroof seals, door lock module, center console, shift boot, and emergency brake handle cover were replaced in preparation for the sale. 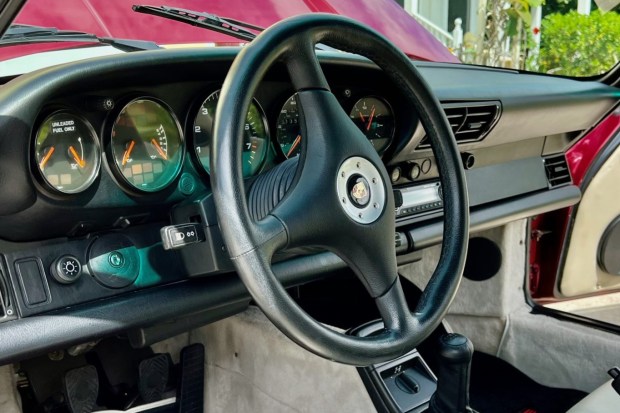 The Tequipment three-spoke steering wheel frames VDO instrumentation including a central tachometer with a 6,800-rpm redline as well as a 180-mph speedometer, a Quarz analog clock, and gauges for oil level, oil pressure, oil temperature, and fuel level. The six-digit odometer shows 137k miles, approximately 60k of which were added under current ownership. The seller notes that a warning light for the deleted spoiler motor displays intermittently. 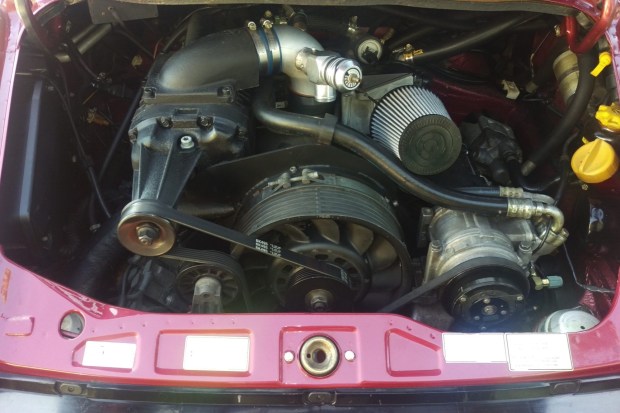 The 3.6-liter M64 flat-six was rebuilt in 2002 by Dulles International Motorsport of Herndon, Virginia, at approximately 112k miles with work including a cylinder head update. A Turbo Performance Center supercharger was added in 2004 at approximately 120k miles. The valve cover gaskets, spark plugs, battery, and hood support struts were replaced in preparation for the sale, and the fuel tank was also drained and cleaned, the air conditioning system recharged, and the oil changed. Photos from the engine rebuild are presented in the gallery. 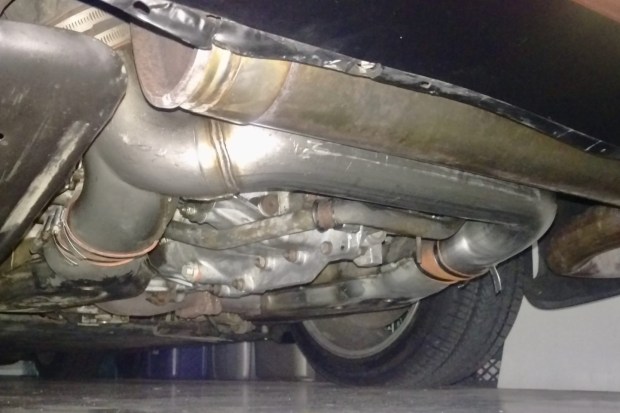 Power is sent to all four wheels via a five-speed manual transaxle. The underside engine cover was removed and the secondary muffler was bypassed under current ownership. 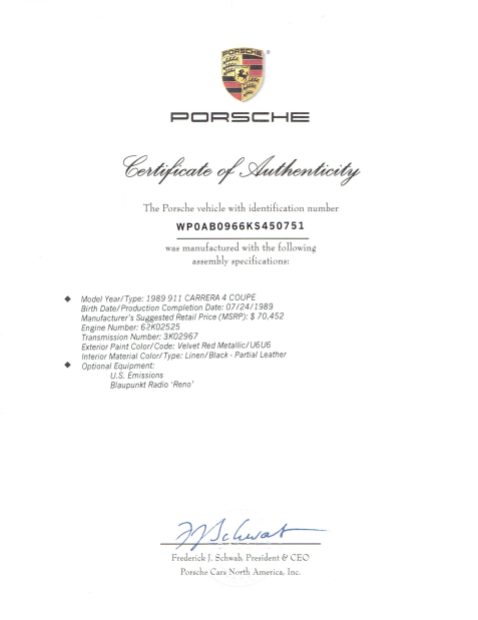 The Porsche Certificate of Authenticity lists colors, optional equipment, and engine number 62K02525, a photo of which is presented in the gallery. 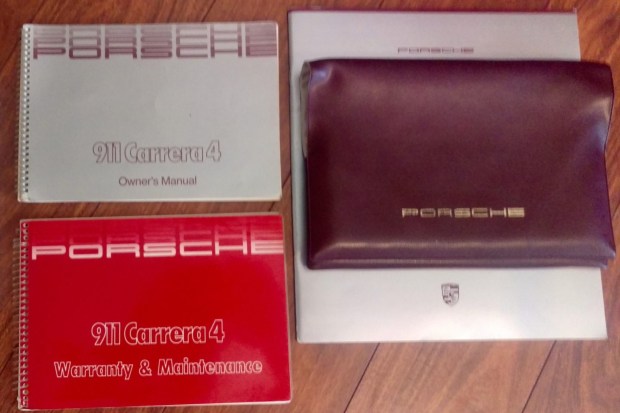 The Carfax report shows no accidents or other damage and lists history in Maryland, Virginia, and Florida since an initial entry in 1994.