This 1998 Porsche 911 Targa was first registered in Texas and is said to have remained with the original owner until it was acquired by the selling dealer in February 2021. The car is finished in black over red full leather and is powered by a numbers-matching 3.6L flat-six paired with a four-speed Tiptronic automatic transaxle. Additional equipment includes a power-operated glass roof panel, 17″ wheels, xenon headlights, heated and power-adjustable front seats, and a Porsche CR-210 AM/FM cassette stereo. Work in August 2021 included refurbishing the steering rack and speedometer, repairing the sliding top mechanism, and replacing the tires, valve covers, alternator, tie rod ends, battery, seat cables, and speakers. This final-year 993 Targa shows 9k miles and is offered by the selling dealer as part of DriverSources’s Oktmotorfest Collection with a jack and tool kit, a tire inflator, two keys and four remotes, a Porsche Classic Technical Certificate, manufacturer’s literature, service records since 2000, a clean Carfax report, and a clean Texas title. 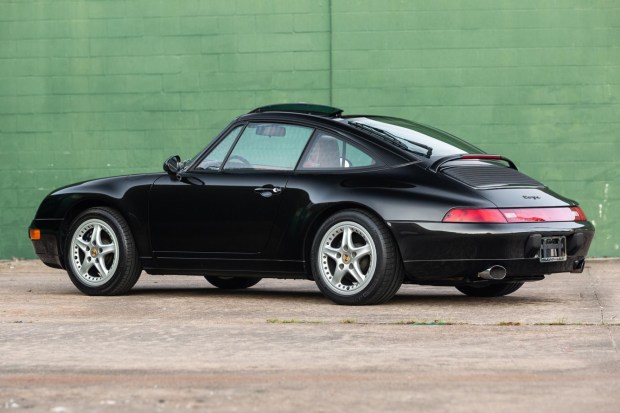 The 993 Targa featured a power-operated sliding glass roof that substituted the removable panel found on the earlier models. This example was ordered in Black Metallic (Z8) and is equipped with xenon headlights, a rear wiper, and a basket-handle rear spoiler with an integrated third brake light. Work under current ownership included repairing the sliding top mechanism and replacing exterior seals and trim as well as the front indicator lenses, headlight drain tubes, door lock plugs, front and rear lid struts, and the quarter panel stone guards. The rear bumper was repaired in January 2012, and paintless dent repair was performed in preparation for the sale. Touch-ups are pointed out by the seller in the image gallery below, which also contains paint meter readings. 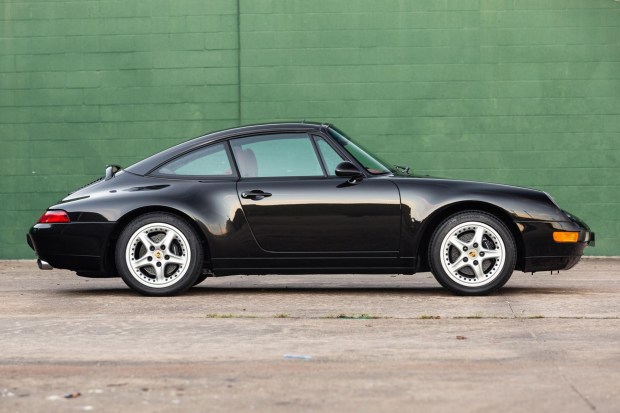 Modular 17″ wheels wear staggered-width Michelin Pilot Sport 2 tires that were mounted in August 2021. Braking is handled by Porsche-script four-piston calipers fitted over cross-drilled and vented rotors at all four corners. The brake and power steering fluids were flushed in August 2021, and the steering rack was rebuilt and the outer tie rod ends were replaced at this time. 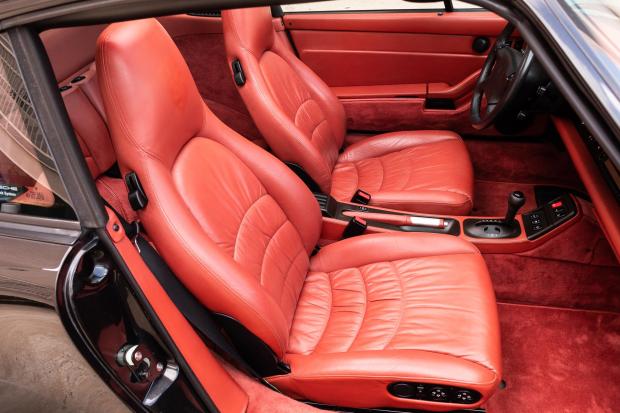 The cabin is trimmed in Boxster Red (MB) full leather and features heated and power-adjustable front seats with driver-side lumbar adjustment and supple leather upholstery. Additional amenities include air conditioning, an aluminum-trimmed parking brake handle, and the Digital Sound package. The speakers and grilles have been replaced under current ownership along with the glove compartment knob, the dome light, and the front seat cables. 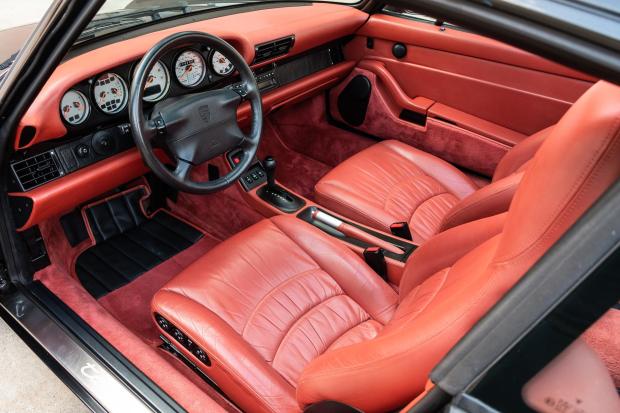 The four-spoke steering wheel features Tiptronic shift buttons and frames VDO instrumentation that includes a central tachometer and a 180-mph speedometer. The six-digit odometer shows 9k miles. The speedometer gauge face and silver trim ring were refreshed and the odometer gears were replaced in August 2021. 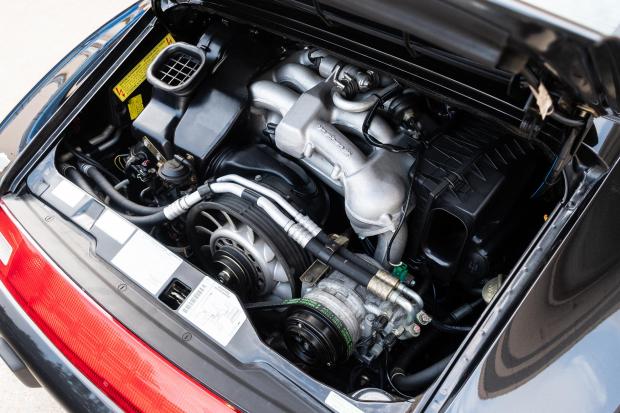 The air-cooled 3.6L flat-six features a VarioRam induction system and was factory rated at 282 horsepower and 250 lb-ft of torque. Work by the selling dealer has included replacing the valve covers with aftermarket billet aluminum components, changing the oil, and replacing the battery as well as the alternator and shroud. Receipts for additional work performed under previous and current ownership are viewable in the gallery. 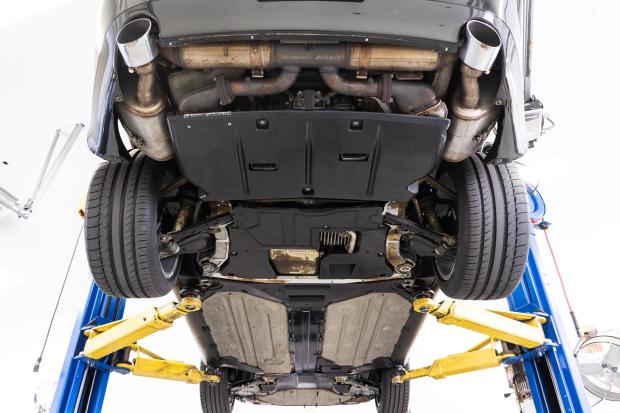 Power is sent to the rear wheels through a four-speed Tiptronic automatic transaxle. Additional images showing the condition of the underside are included in the gallery. 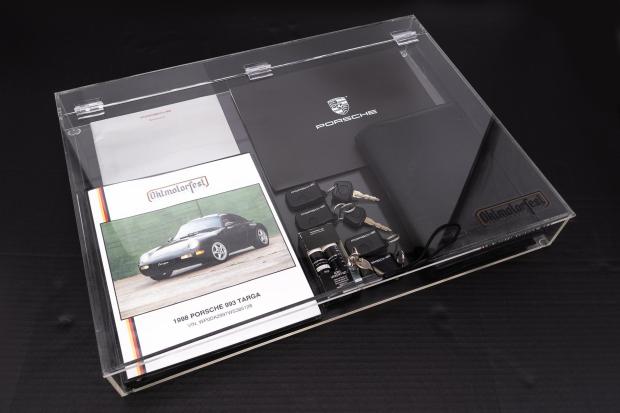 Documentation accompanies the car that includes manufacturer’s literature and service records dating back to 2000. 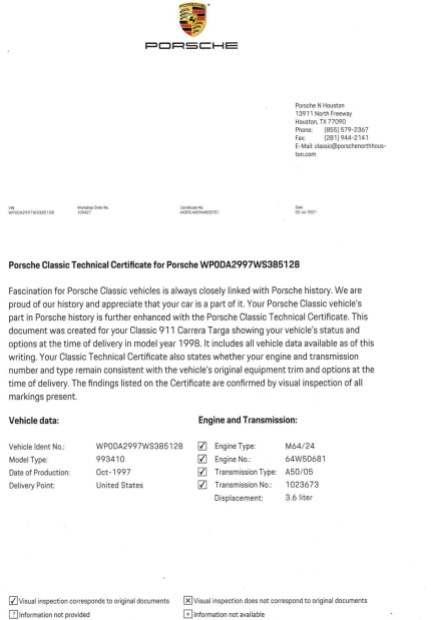 A Porsche Classic Technical Certificate from Porsche North Houston of Houston, Texas, also accompanies the car. The document describes the engine and transaxle as numbers matching.

The Carfax report shows no accidents or other damage and lists history in Texas with a single owner from the earliest entry in January 1998.