This 1996 Porsche 911 is one of 79 track-only GT2 versions built between 1995 and 1998 and was reportedly ordered new by Spencer Lane of Fast Lane Racing in Ridgefield, Connecticut. The car is said to have participated in qualifying events for the 1996 24 Hours of Daytona, although it did not compete in the race. It was subsequently refurbished in the 2010s before it was acquired by the selling dealer in October 2018. The car is finished in Guards Red over a stripped interior with a single Recaro racing seat trimmed in black cloth, and power comes from a twin-turbocharged 3.6-liter Metzger flat-six paired with a six-speed manual transaxle and a limited-slip differential. Equipment includes an aluminum intercooler, JRZ remote-reservoir shock absorbers, an alloy rear subframe with a double-wishbone setup, an EFI Technology Euro96 ECU, BBS multi-piece center-lock wheels, an aluminum hood and door panels, riveted fender flares, a “banana” biplane rear wing, a full roll cage, a fire-suppression system, and a MOMO steering wheel on a quick-release hub. A replacement fuel cell was reportedly installed in March 2022. This 993 GT2 was last driven on track by David Donohue at Pikes Peak International Raceway in June 2021 and has not been driven since according to the selling dealer. It is now offered in Colorado Springs, Colorado, with a Porsche Production Specifications certificate and a bill of sale. 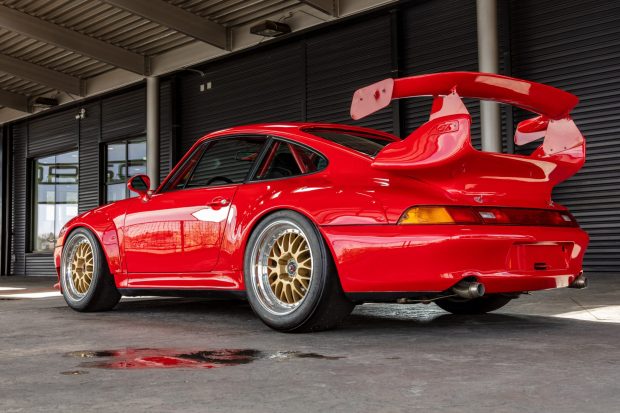 The 993 GT2 was developed by Porsche to meet homologation requirements for FIA GT car racing. The car was based on the 993 Turbo but utilizes a rear-wheel drive layout as well as an alloy rear subframe with a double-wishbone suspension setup, riveted fender flares, an aluminum hood and door panels, and a “banana” biplane rear wing. 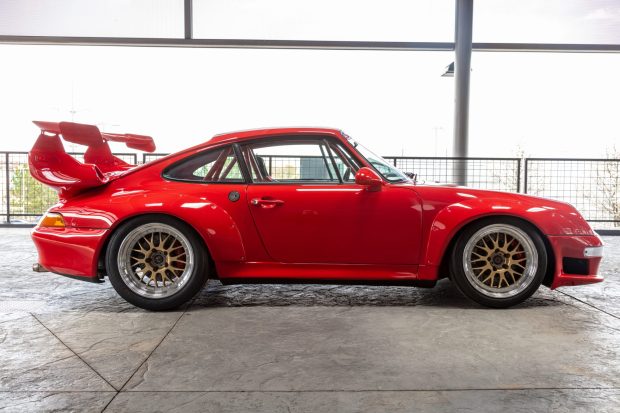 This example is said to have been repainted in its factory Guards Red (G1) during the 2010s refurbishment. Additional equipment includes a dual-exit exhaust, a red Porsche windshield graphic, cowl-mounted fire suppression and fuel cutoff switches, a hood with a central fuel filler, and a front bumper cover with clear turn signal lenses and brake cooling ducts. 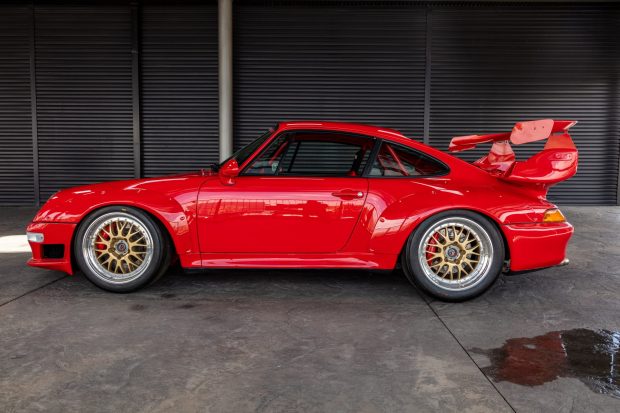 The 18″ BBS multi-piece wheels feature gold centers with center-lock hubs and are mounted with 245/645–18 front and 305/680–18 rear Pirelli slicks. JRZ Suspension Engineering shocks with remote reservoirs are fitted at all four corners, and stopping power is provided by red-painted calipers over cross-drilled rotors at all four corners. 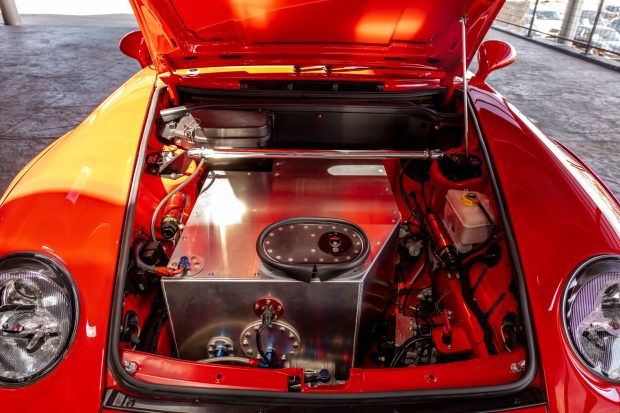 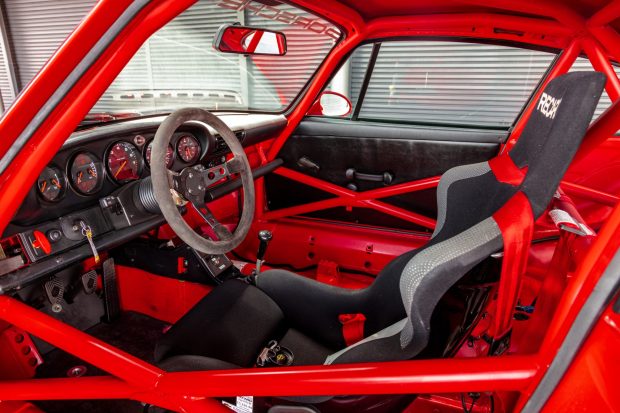 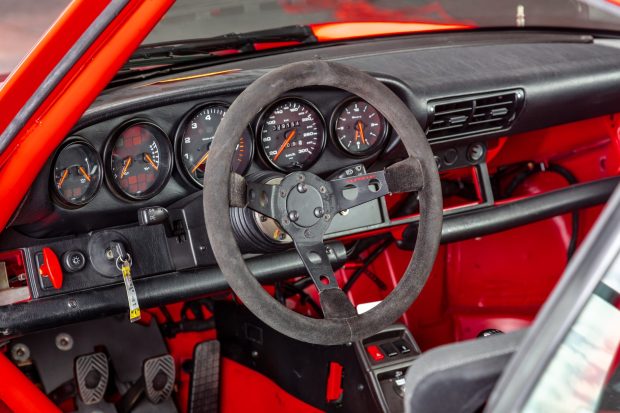 The Alcantara-wrapped MOMO steering wheel is mounted on a quick-release hub ahead of VDO instrumentation that includes a 7,600-rpm tachometer, a 300-km/h speedometer, a Quarz clock, and auxiliary gauges. The six-digit odometer shows 29k kilometers (~18k miles). A November 2018 mileage inconsistency is noted on the Carfax report. 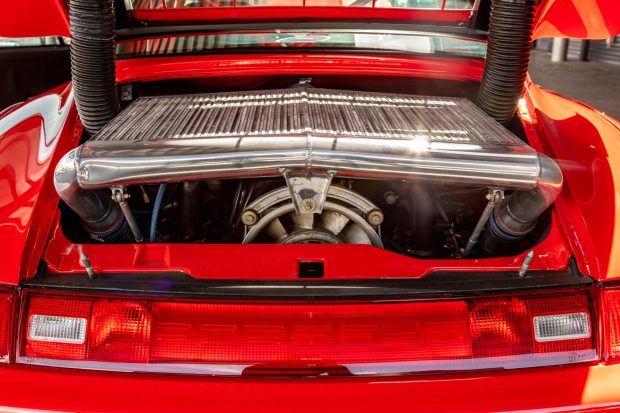 The 3.6-liter Metzger flat-six features a turbocharger for each cylinder bank as well as a VarioRam induction system and an aluminum intercooler. The engine is said to have been rebuilt by Bob Holcombe at Mode Inc. in Scottsdale, Arizona, during the 2010s refurbishment. 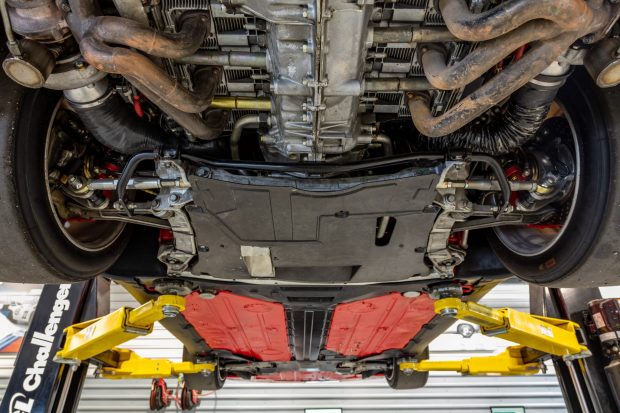 Power is sent to the rear wheels via a G50/54 six-speed manual transaxle with a limited-slip differential. 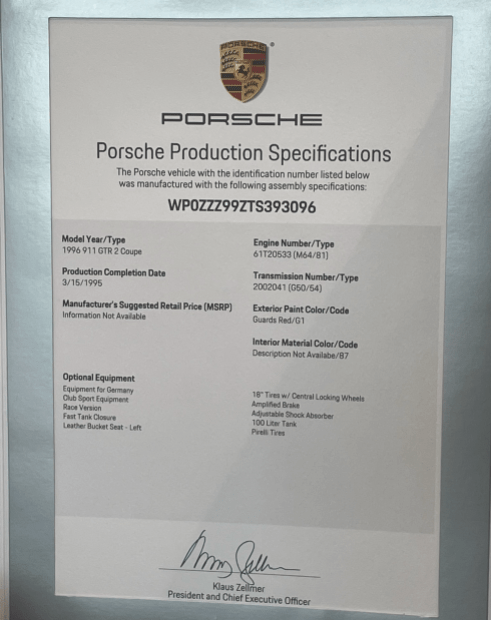 The Carfax report lists two entries in California and Colorado between December 2006 and November 2018, the latter of which notes a mileage consistency.