This 1977 Porsche 930 Turbo Carrera is one of 727 US-market examples produced for the model year and was originally built with equipment for Puerto Rico. It later spent time in New Mexico prior to a refurbishment completed before the seller’s 2018 purchase. Subsequent modifications include the installation of a WaveTrac limited-slip differential, a KW Variant 3 suspension kit, 917-style brake calipers, a K27 turbocharger, a RarlyL8 Motorsports muffler, bronze-powder-coated Group 4 wheels, and a Bluetooth-capable Blaupunkt radio. The car is powered by a turbocharged 3.0-liter flat-six linked with a four-speed manual transaxle and is finished in silver over red leather with plaid cloth inserts. Other equipment includes a sunroof, fog lights, a whale tail rear spoiler, front sport seats, power windows, and air conditioning. This 930 Turbo Carrera is now offered by the seller on behalf of their spouse with a Porsche Certificate of Authenticity, manufacturer’s literature, spare parts, and a clean New Jersey title. 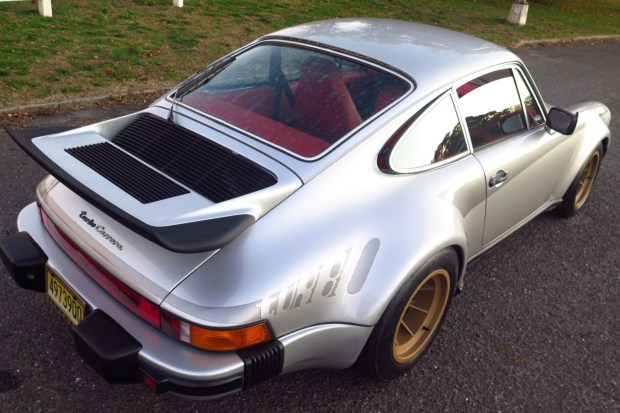 The car was reportedly refinished in silver in 2016 and features front and rear fog lamps, a sunroof, headlight washers, dual side mirrors, a rear window wiper, quarter panel stone guards, rear bumperettes, a front spoiler, and a “whale tail” rear spoiler. The Turbo graphics are said to have been installed and the hood emblem replaced under current ownership. 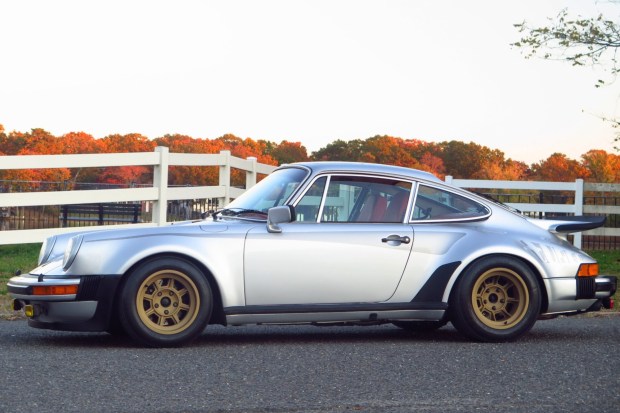 Bronze-powder-coated 15″ Campagnolo-look Group 4 wheels were reportedly refinished in preparation for the sale and are mounted with Michelin TB15 tires measuring 215/55 up front and 270/45 at the rear. The suspension is said to have been modified under current ownership with KW Variant 3 dual-adjustable shocks and struts, an Elephant Racing bump steer kit, and 930 sway bars sourced from a 1986 model. Braking is handled by 917-style calipers with 930 brake pads, two-piece rotors, a 23mm master cylinder, and replacement brake lines. Four spare Fuchs wheels are included in the sale. 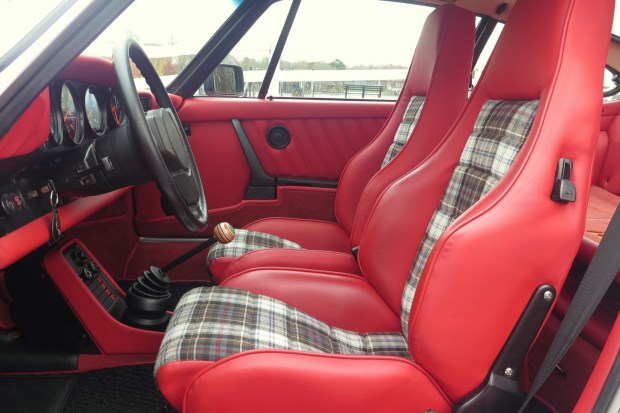 The cabin was refreshed under previous ownership and features front sport seats trimmed in red leather with plaid inserts along with a matching red dashboard, door panels, carpeting, and folding rear seats. Equipment includes power windows, a custom JWest Engineering shifter, black Coco Mats, air conditioning, and a refurbished Blaupunkt Bamberg stereo with a microphone and Bluetooth connectivity paired with Infinity speakers. The seller notes that the heater was repaired under current ownership and that removable seat adapters were fabricated to allow for additional front-seat travel. A Carbone front trunk carpet kit was also installed, and the air-conditioning system was recharged. 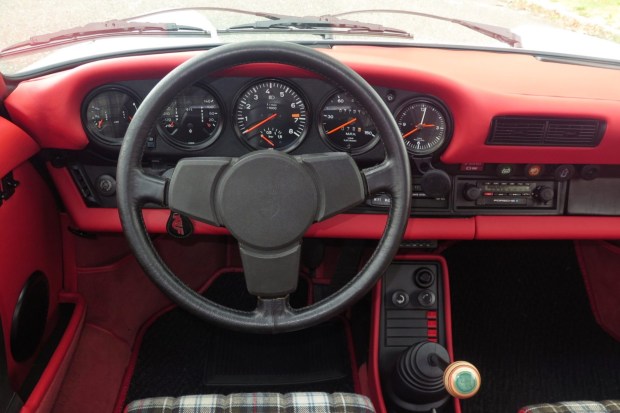 The three-spoke leather-wrapped steering wheel frames a 150-mph speedometer and a tachometer with a 6,700-rpm redline as well as an analog clock and gauges for oil level, oil temperature, oil pressure, and fuel level. The six-digit odometer shows 78k miles, approximately 3k of which were added under current ownership. 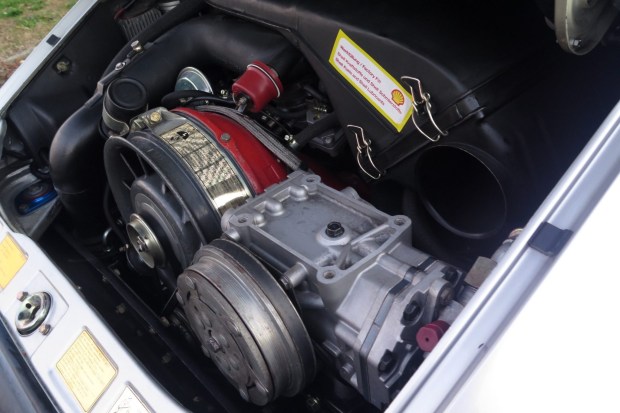 Power is from a turbocharged 3.0-liter flat-six that was reportedly rebuilt under prior ownership by Gulf Performance Center in Pompano Beach, Florida. Service under current ownership by Dawes Motorsports in Stroudsburg, Pennsylvania, is said to include rebuilding the wastegate, adjusting the valves, and replacing the spark plugs. The K27 turbocharger is said to have been rebuilt to include a Raptor Upgrade by Evergreen Turbo in Ocala, Florida, and a Classic Retrofit CDI ignition kit was installed under current ownership. 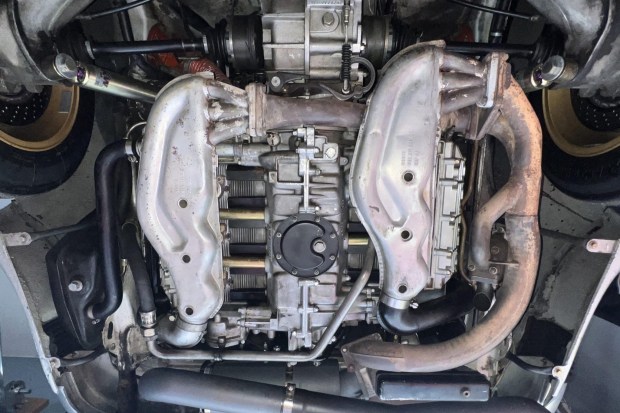 Power is sent to the rear wheels through a four-speed manual transaxle that has reportedly been rebuilt and fitted with a WaveTrac limited-slip differential. The car has been fitted with a RarlyL8 Motorsports muffler. 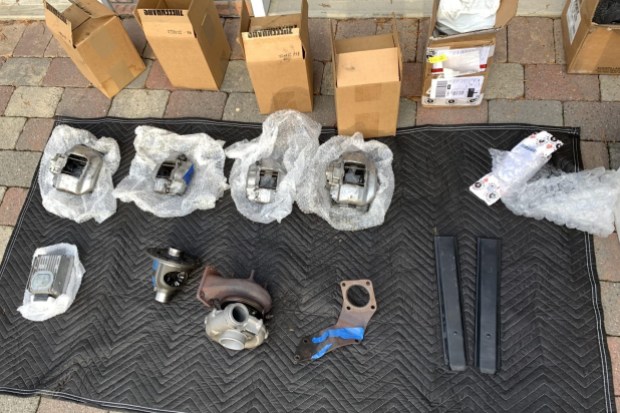 Spare and removed parts are included in the sale. 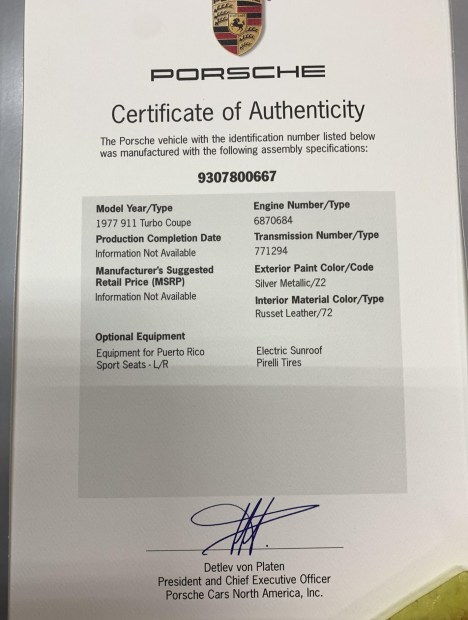